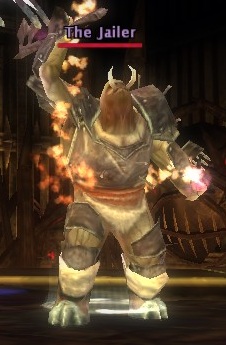 
Description: The Jailer <Jailer of Shavarath> is one of the raid bosses of the Tower of Despair raid, introduced in Module 9. You'll first encounter him along with his partner the Judge in the Tower's first level..

None. The Jailer is a standard Orthon, just a bit larger and stronger then your average orthon.