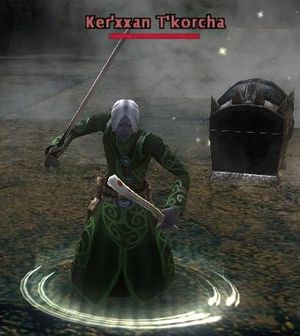 
Description: Ker'xxan T'korcha is an optional red named mini boss encountered in Redwillow's Ruins. He and his gang won't become hostile unless you hand over Redwillow's letter. He wont attack if you have enough diplomacy and use that option. Once defeated you'll be rewarded with some optional xp and a chest, if you used diplomacy you will get xp but not the chest.

If you refused (or ignored) Redwillow's request to deliver his letter, he will tell you:

If you accepted his request, however, he will reply: