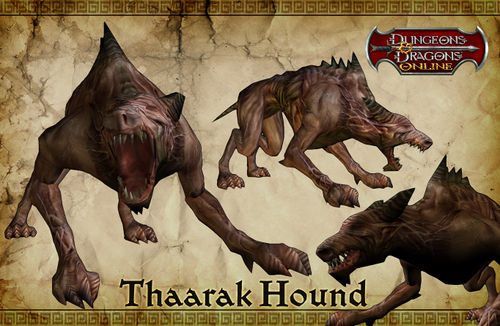 After meeting one of the Daelkyr's hunting hounds, my advice to the adventurer encountering it for the first time would be: run. Of course, given the creature’s dogged (ahem) persistence and quick speed, that’s not especially likely to work. And while the Thaarak hound may be amused by entreaties for mercy or surrender, that avenue isn't likely to meet with success. So, fight you must, though the odds be long. Perhaps you’ll have time to scratch out a loving good-bye to a friend, mate, or mother on a nearby stone or wall.

In combat, be sure that your wizard and cleric prepare any potential victims with Remove Fear, Deathward, and Protection Against Acid. As accomplished adventurers know, casting a preemptive Remove Fear gives all of the allies protection for some time. The Protection Against Death effects makes the target proof against a lucky phantasmal killer that the hound is likely to summon. Finally, the acid immunity serves good stead given the Thaarak's breath that deals damage not just once, but in the minutes that follow as it seeps into the skin and internal organs. Stoneskin and other general defensive enchantments remain good ideas as well, given the strength of the monster’s bite. Offensive spells against the Thaarak are frequently fruitless anyway, given that the hellspawned whelp possesses a resistance to spell energy that make the drow of Xen’drik envious. Add to that, it has excellent saving throws, as it is an outsider.

The hound possesses a minor degree of damage reduction against all weapons save Lawful ones, which is an oddity for a Daelkyr-spawn, as they are normally vulnerable to Byeshk.

Tharaak hounds mainly engage in melee combat trying to slash and bite their opponents down. Should those attacks not quickly dispatch their enemies however, they will use their more advanced abilities: Acid Blast and Dance of Death.

Dance of death is a Tharaak main special ability. They will stand up on their hind legs and start to dance while focused on one opponent. Their dance takes around 4–5 seconds and when complete can scare even the bravest adventurers to death. It works exactly like the spell Phantasmal Killer upon completion. However note the Hound is very vulnerable while in this dancing state as he must stand on his 2 hind legs to complete it.. A powerful enough blow will knockdown the hound and interrupt his dance (any damage dealt has a chance of knocking down the hound). You can also negate it with either deathblock items or a deathward spell. Once knocked down, continue to attack the hound and with some effort you should kill it, if not perhaps attempt to trip it to keep it down when it gets back up. While hounds are somewhat resistant to trips when standing on all 4 legs, they have far lower strength saves than most four legged creatures of similar level.

A Thaarak hound's mere presence strikes fears into its enemies. Anyone nearby must make a fairly low will save or be feared, as the fear spell. Negate this with greater heroism or other fear immunitiy items/abilities.