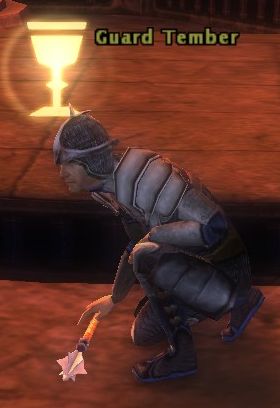 Location: The Harbor, in The Waterworks at the end of north path

Description: Guard Tember is the cousin of Arlos and Venn, and rushed in the Waterworks as soon as he found out they were kidnapped. He got beaten by the kobolds, and is now asking for your help.

Once you find him at the sewers, he will tell you:

Talking to him after acquiring the chain, but before saving Arlos, will make him say:

After saving Arlos, when you talk to him again, he will say:

Talking to him after acquiring the second quest, but before saving Venn, will make him say:

After finding Venn, he will reply with the following:

After completing the chain and taking the reward, if you talk to him again, he will reply: