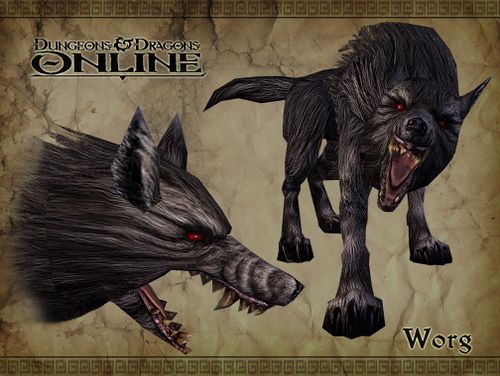 Credit the worg with at least half the legends of malevolent wolves that hunt humans weak and strong. While an occasional starving wolf may attack humankind, there's nothing occasional about it for a worg. Malice palpably surrounds these dark quadrupeds, and it is with a fierce cunning that they coordinate a hunt, stalk their prey, and close for a kill. Worgs, in truth, are not animals, they are more like malevolent demons that have taken wolf-like form. In the world of Eberron, that theory has more than some merit, as tales of demonic possession are frighteningly common.

In battle, worgs attack much as wolves do - frequently in large numbers, relying on their ability to trip foes and then deal mortal blows when the foe is on the ground. Worgs have an uncanny knack for sneaking up on their enemies in darkness, often stalking their prey for some distance before attacking. In addition to coordinating their attacks among their own kind, worgs frequently appear with goblins and hobgoblins, though in truth a battle between a typical worg vs. a typical goblin fight would result in a healthy feast for worgs. Alongside more powerful creatures such as hill giants, worgs serve more willingly as scouts and pets.