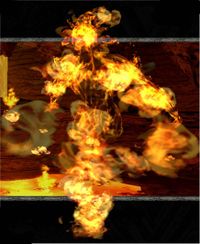 The fire elemental is an admirably simple creature. It just wants to burn it all down. Burn the buildings, burn the people, burn the stones, and even burn the water. To be honest, young adventurer, sometimes as I wander the stinking sewers beneath our rotting seaside city, filled with its greed, corruption, and monsters pretending to be civilized, I share the fire elemental's sentiment. Burn it all down, yeah. Especially the quarters of House Kundarak and the Twelve, those scheming twits who cast me out. Now before you show up on my door accusing me of arson, let's move on to discussion just how you can deal with these summoned creatures when you encounter them upon the travails.

First, the obvious. The creature is made of flame. If you go looking for something material beneath that halo of heat, you're not going to find anything. So it goes without saying that arcane spellcasters should put away their fireballs and scorching rays. Using such fire attacks on the fire elemental won't be so disastrous as, say, using them on an iron golem (which actually heals in the heat), but it still will have no effect. The preferred elemental energy to unleash on the fire elemental is, again as you'd expect, cold-based attacks. That includes sleet storms, ice storms, and, most optimally, cone of cold. An important note to wizards and sorcerers: chill touch, despite its name, does not deal cold damage! Poor Severinius never did learn that lesson, though I suppose he is now reflecting on it in Dolurrh. Well, come to think of it, he probably isn't, considering that the shades of the dead there quickly lose their memory of life... but now I ramble.

When attempting to deal with the fire elemental's own attacks, fire resistance is of paramount importance. With a protection from fire spell, or even resist fire, you can often ignore more than half of the fire elemental's damage output. But for a melee fighting attempting to go toe-to-toe with this creature, be aware that the creature is surprisingly difficult to hit. Nimble and wreathed in protective flame, only the truest struck of blows will land on this near mindless entity. So now it isn't the time for Power Attack.

Usually a fire elemental will prefer to stay back and continuously lob Fireballs at you. The larger, higher CR versions use Delayed Blast Fireballs. However if you do engage them in melee, they will fight back with powerful melee attacks as well.