The social panel is designed for both aspiring party leaders and those wanting to join a group. It allows you to quickly see who is looking for a group, and to find a group looking for new members. Unfortunately the tutorial of Korthos Island does not cover this invaluable tool, leaving too many players clumsily trying to use the "General" chat channel to arrange this.

Press o or click on the icon to open the Social panel. You will see four tabs at the top of the panel: Grouping, Guild, Friends and Who. 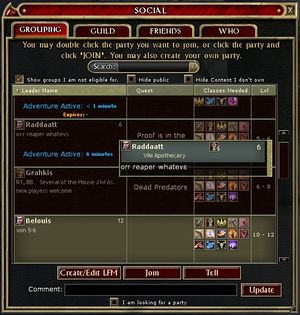 The Grouping tab is used to find a group, advertise your own party, and get details about members of your current party. Groups whose leaders are actively recruiting members will appear in the "Looking for Members" or 'LFM' list below.

Groups for which your character is eligible are ticked. To show only those Groups, uncheck the small box "Show Groups I am not eligible for". If you are F2P or VIP, check the small box "Show only content I own". This avoids the irritation of joining a group only to discover at the entrance that you would need a trip to the store to access that dungeon. Common group descriptions are described in the Jargon section, below.

Hover over a Group you are interested in, and details of those players who have already joined will pop up.

To join a group, select it then click on the Join button at the bottom. This sends a message to the party leader requesting an invitation for your character.

The Tell button is a convenient alternative to sending a private message using "/tell" in the 'General' channel.

If the party leader wants you, they send a popup invitation. Click 'Yes' or 'No' to respond, or simply ignore it.

To let others know that you are looking for a group, click on the “I am looking for a party” button at the bottom of the page. This creates a 'LFG' icon above your character’s head, and flags your entry in the player list in the 'Who' tab. Click on the 'LFG' button again to turn your LFG status off.

To create your own party and advertise for members, click the 'Create' button. This opens a new window for making entries in the 'LFM' list.

To alter your 'LFM' advert later, click on the 'Create' button again, which will return you to that window. Click "Update Party" to publish your changes.

Your 'LFM' advert automatically disappears when your group is full. To close it before then, Uncheck the "All" classes button so there are no classes left.

When other players respond to your advert, you will get requests for invitations. You may accept or reject these requests immediately, but you may also leave the decision for later. They can then be displayed in a list by clicking the 'Join Requests' button in the "Create Party" window. This is a convenient way to compare possible party members before accepting or rejecting them. When your group is full, or you close the 'LFM' entry, any remaining hopefuls get a message telling them so.

This panel displays information and commands associated with guilds.

The "Members" shows a list of all members of your guild. It can be re-ordered by "Name" and "Last logged on" which usefully lets you see who is currently logged on.

The "Rewards" Tab shows the current information about the level of your guild and the benefits enabled for it. See the Guilds section for more information.

The Who panel allows you to find other players that are logged in. The panel contains two drop-down menus that let you define a search for players by 'Class' and 'Level'. This can be used to look for possible members for a group, or to track down someone who's name you have forgotten.

It also has an input box where you can type a portion of a player’s name. The name search will try to match the entered text against any part of a name; for example entering “and” will match players “Andy”, “Cassandra” and “Redhand.”

Press "Search" to start the query. The results appear in a scrollable list at the bottom of the panel.

The Friends tab opens a window where you can easily keep track of particular players in the game. To add someone to your 'Friends' list, simply select them when they are near you and then click on the Add button in the Friends panel, or type their name in the "Add" box. The traffic light tells you if they are online or not.

By right clicking on their name, you can quickly send a tell, or invite them to group.

To remove a character from your Friends list, select their name and then click on the Remove button.

The 'comment' allowed in the 'LFM' list is only short, so the text is often terse. For a full list of jargon see the Glossary, but the following are commonly used;

Other ways to form groups[edit]

There are other ways of forming or adding to groups, and although less organized, these are sometimes quicker and easier.

You can invite someone standing in front of you to join your group simply by clicking on the 'Invite' button on the edge of their Portrait.

Similarly, you can use the 'Invite' button at the bottom of the 'Who' Tab (see above). It is polite to send your target a 'Tell' first, roughly describing your aims, because otherwise all they will see is an invitation out of the blue with nothing but your name to go on. You can expect blind invitations to be refused unless the recipient is feeling very bored.

If a player is using a chat channel, right-click their name in the chat window to get a drop-down menu which has 'Invite' as an option. This makes it easy to include the invitation as part of a conversation.

In all cases, the pop-up invitation the recipient sees is the same, and they have the same option of accepting or refusing it.

Lastly, as soon as your party is formed, do switch to the 'Party' chat channel. Indeed you can form a party just to use the 'Party' channel for private chat, even if you are not actually going questing together.