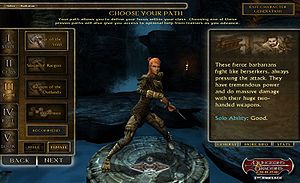 A path is a predefined build intended to make it easier for inexperienced players to get into the game quickly by simplifying the character creation process. Each class features three paths, as well as a "Customize" option that ignores paths and gives complete control to the player. Paths do not offer any powers or abilities that are not available to custom builds. In fact, any path build can be replicated exactly by a custom build merely by selecting the same features.

If you choose a path, the game makes all decisions regarding your alignment, ability scores, skills, and feat and spell selections, both at creation and every time you train up to the next level. There is no middle ground between paths and full customization.

Paths do not include Enhancement picks. You must still select those yourself.

Each time you train up a level, you have the option of leaving your path and becoming fully customizable. You automatically leave your path if you multiclass. You cannot resume a path once you leave it or start on a path after creation.