Once per life, you can get extra experience equal to 100% of elite XP as your bravery bonus.

Bravery bonus is tracked separately across Heroic and Epic difficulties. This means that if you play a dungeon on Heroic Elite, you will be able to acquire the Epic Elite Bravery Bonus if you play that same dungeon again in Epic levels.

In order to be eligible for the full bravery bonus, your character must be no more than:

If you have an over-level player in your group (more than the range above), Bravery Bonus is halved.

These level restrictions are applied during the first run of the quest only. If you split the bravery bonus by running first on Hard and then on Elite, the second (Elite) run will grant the +50% bonus even if you are over level (provided you are not so far over level that all XP is reduced to zero).

The game keeps totals of how many dungeons you have completed on hard and elite. The numbers have no gameplay effect. The streaks cannot be broken, however they only increase while you are within the level range as written above. 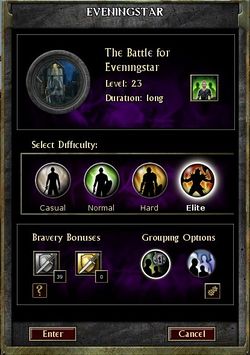 These bonuses only apply for the first completion of a quest, on top of the first time completion bonus. However, these can only be awarded once per a quest, unlike the first time difficulty bonus which can be awarded multiple times per a quest. Running the same quest additional times will not give these bonuses again or affect the bravery streak. After the first run, you may run the quest on any difficulty and it will not break your bravery streak.

Players often abbreviate these together as BB or Streak on LFM panels. For example, "elite for BB" or "for elite Streak" and such.

In order for the bravery bonus to apply, all of the following conditions must be met:

As of Update 27, there is a "Bravery Marshall", an NPC in the Hall of Heroes (Kranston Bell) and on Guild Airships (usually near the "Buff Bar"), that allows a character to temporarily "pause" or suspend their Bravery Bonus. This is a toggle, and will remain in effect until toggled again by speaking to the NPC. The Bravery Bonus will not reset nor increment while paused.

Note: Reincarnating a character might reactivate a paused Bravery Bonus. Check your bravery status with the Bravery Marshal. 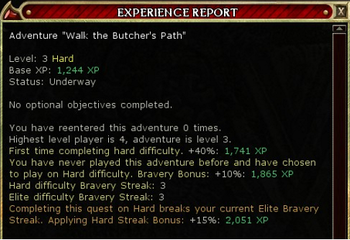 XP report as you enter a quest on Hard, with above status 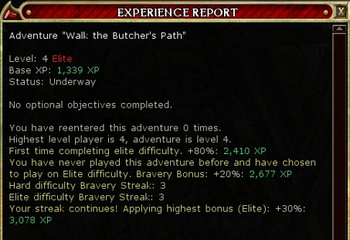 The bravery and streak bonuses stack with each other, but also stack with the standard "first time" bonus. Together, these bonuses can provide up to +75% on Hard, +150% on Elite, and +200% on Reaper when the maximum streak is obtained.

When determining which streak bonus (Hard or Elite) will be applied, the higher number of the two streak bonuses takes precedence.

What breaks Streaks and what doesn't[edit]

All streaks are broken when both the following are true:

Running solo-only quests doesn't affect your streak in any way.

Running Devil Assault no longer affects your bravery streak in any way, as of Update 11.1.