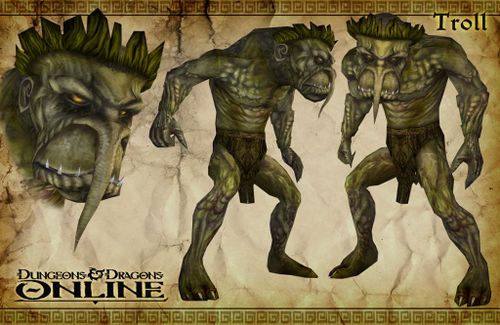 The troll is a carnivore, known for indiscriminately attacking anything which it may perceive as food. Standing at nine foot tall, with a hunched posture and mottled rubbery skin, the troll appears to be a clumsy beast. However, their reputation precedes them wherever they go, and residents of Xen'drik are well aware of the threat these creatures pose.

Their renowned ruthlessness is due to the fact that trolls, unlike even the most ancient wyrms, have no fear of death. They regenerate damage at a phenomenal rate, and so even if they cannot overpower their foes, they can likely outlast them. Luckily for adventurers, their vulnerability to fire and acid are well known and there are strong fire- and acid-based spells in most Wizards' and Sorcerers' arsenals.

Among other places, trolls are commonly found on Sorrowdusk Isle. There they have been responsible for division among the local ogre tribes, forcing the ogres out of the caves that they once called their own.