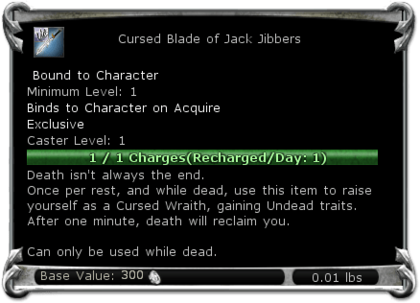 Once per rest, and while dead, use this item to raise yourself as a Cursed Wraith, gaining Undead traits. After one minute, death will reclaim you.
Can only be used while dead.

Note: This item does work in raids. There is also a ~20 minute cool down. 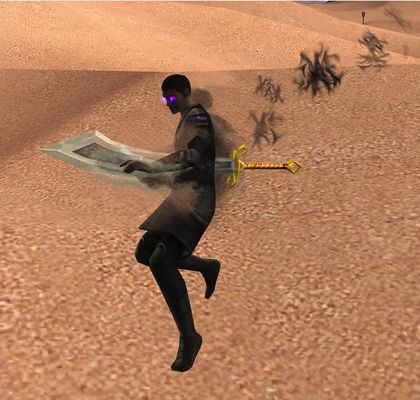 So that's where I put my falchion...

Curse of Jack Jibbers (in-game description): The curse of Jack Jibbers has risen you from the grave as a Wraith! After one minute, death will reclaim you. While in this form, enemy attacks have a 25% chance to miss you due to your incorporeality, you float as if affected by featherfall, have a +20 bonus to the Move Silently and Balance skills, and your attacks function as if they had Ghost Touch. On Critical Melee Hit: Your attack deals 1d6 Constitution damage to the victim. You have 100% critical hit resistance, are healed by negative energy, and are unaffected by positive energy or repair effects, but take double damage from light effects. You are considered undead rather than your original type for the purposes of most effects.