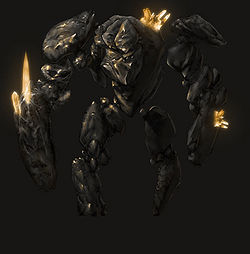 The earth elemental falls into a unique classification of creatures about whom human understanding is at once complete and yet utterly lacking. For powerful wizards and sorcerers, the art of summoning up these powerful manifestations of the primeval earth is well-established. While violent and primordial by nature, control over these creatures - sentient creatures, though not especially bright - is relatively easy to establish, with centuries of documented experience. And yet still, very little is known about the ultimate nature of these creatures. Why do they exist? Was the spark of life and a dim torch of intelligence placed inside these creatures by some nature deity, by extraplanar beings, or by the act of creation itself?

To the adventurers or Xen'drik, these questions must finally be left aside for sages and arcane researchers. There's enough information to master in the defeating of these strong and tough opponents. And they are strong indeed, possessed of a strength that no mortal man or woman could match. And with their attunement to the ground, the earth elemental can reach forth a fist of stone out of the ground beneath their opponent, preventing movement while the elemental brings its slamming fists of stone. More impressive, though, is their sheer implacability. The earth elemental is immune to critical hits and sneak attacks, resistant to many spells and spell energies, and possessed of a magical toughness that reduces strong blows to mere nicks against their rocky surface. Unlike many other forms of such damage resistance, no enchanted property or energy has been known to penetrate the toughness of the earth elemental. Magic that repels extraplanar beings - most commonly dismissal - is the best tool against these foes. Meanwhile, rogues are at a significant disadvantage when dealing with earth elementals, and more talented members of that class frequently turn to wands, scrolls, and other accoutrements that are powered by their uncanny knack for magical apparati.

Even after mastering the defeat of the typical human-sized earth elemental specimen, talented adventurers sometimes continue to prove their valor against the summons of more powerful wizards and sorcerers - great hulking masses of earth that have all of their smaller kin's toughness and yet still greater strength to bludgeon even the toughest dwarf into star-filled oblivion.