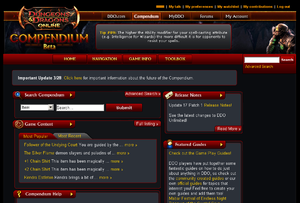 The DDO Compendium was Turbine's official information source for DDO. Much of it was automatically imported directly from the game's databases. The site has been taken down as of May 2013.

Unlike DDOwiki, the compendium had many severe limitations:

The official description of the site from the Compendium itself is:

The Compendium contains information on nearly every quest, item, NPC, class, and race in Dungeon & Dragons Online™. Players can even use their forum account to log into the Compendium to edit!