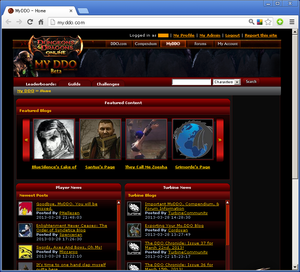 Screenshot of the site, 2013 March

MyDDO (my.ddo.com) was a feature of the ddo.com website and loosely integrated with the game itself.

Based on their game account, each player was given access to wordpress-based webspace and lookup to their own game characters within the site. It was used to post blogs articles, post guild information, track and compare guild renown progress, and do gear checks on other players to make sure they were quest or raid ready. Lottery and Challenge leaderboad were also implemented.

However, guilds and player listings would often bug out and disappear off the system entirely or fail to properly update along with in-game progress. Turbine eventually removed public access to MyDDO in May 2013.

Partial archives of MyDDO data exist (as of June 2015) on a few DDO fansites such as DDOOracle.com and YourDDO/DDOCrafting.info