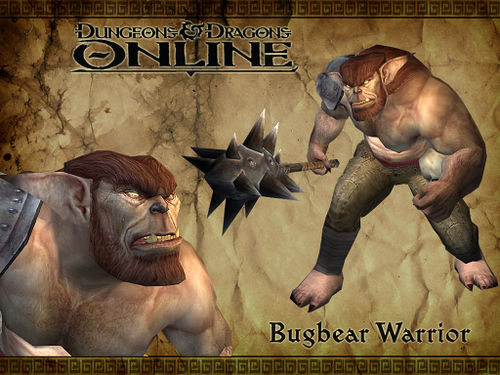 Bugbears are monsters of the Goblinoid type.

Bugbears are taller, stronger, tougher, and more nimble than the typical human. They are the rulers of the goblinoids and most powerful of their kind, and as a result bugbears possess a ferocity that recalls their bear-like facial appearance that gave them their name.

In Eberron, many of the more impoverished and lower-ranking bugbears have sharpened their claws, sometimes fitting them with shards of bone or stone. More advanced bugbears, along with their leaders, favor the use of morningstars. Some of those leaders have even mastered the human arts of cleaving and whirling to create area-of-attacks with their morningstars.

A lesser-known group of bugbears, their existence unknown to most of Xen'drik, function as trained killers and assassins. Most of the time, these assassin work exclusively for their own kind, or more powerful creatures that live below. Lately, however, rumors persist that agents of the Emerald Claw have begun to employ these bloodletters as their private mercenary force.