From DDO wiki
(Redirected from Arcanaloth)
Jump to: navigation, search 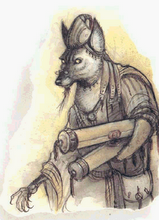 The arcanaloth are the record keepers of the Yugoloth. As yugoloths go, they are a civilized breed. They are Neutral Evil aligned.

Arcanaloths are the scribes, record-keepers, negotiators, and deal-makers for the yugoloths of Gehenna. As such, they are grasping, wheedling manipulators, but at least they’re generally true to their word.

An arcanaloth has humanoid form but the head of a fanged jackal or war dog. It dresses finely but is businesslike and abrupt, if not downright surly. Arcanaloths can speak and write any language.

Arcanaloths are weak in melee, but they are powerful spellcasters.

The physical attack of a powerful arcanaloth consists of a claw and bite routine. They enjoy inflicting pain and torment with their claws.

All arcanaloths commonly memorize destructive spells but they keep a wise eye on their escape and defensive spells for good measure. They are extremely intelligent and use their spells to their best advantage. In general, these creatures avoid hand-to-hand combat.

Arcanaloths are harmed only by magical weapons of great enchantment. They are immune to mind affecting spells. They may never be surprised while on lower planes. They can only be permanently destroyed while on Gehenna; when this happens, its accumulated knowledge travels to the Tower of the Arcanaloths to be absorbed into the racial memory of all arcanaloths.