Prison of the Planes/Sir Raleigh 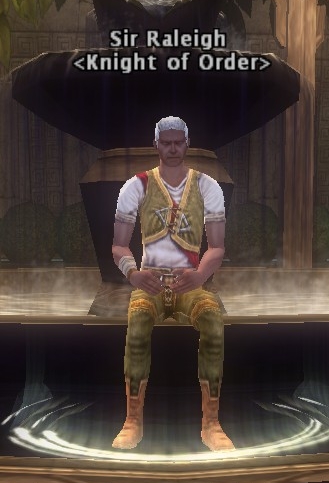 Also known as "Lawful room", a lawfully aligned player must answer Sir Raleigh's question correctly to successfully complete the chamber. Bypass if you do not have a lawfully aligned person. If you do answer the question, be sure to answer them with your alignment in mind. As of Update 18 (?), there is a penalty for failing this objective.

(NPC): Sir Raleigh tells you, "Laws are all there is. Nature was built on laws and rule and order. If you do not respect Law, then bother me no further."

(NPC): Sir Raleigh tells you, "I wish to believe you, but many imposters have able to pass my test, and I will finally be able to pass the banner I have carried for a millenia. You must answer at least three of the following question correctly before I will trust you are worth this honor."

(NPC): You tell Sir Raleigh, "Ask your questions Sir Raleigh. My sense of Law shall not fail me."