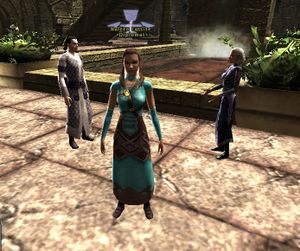 Location: Lordsmarch Plaza, near the center of the plaza

Notes: She tells the player to meet investigators outside of Stormreach who are investigating strange rumors of Droaam forces that may be amassing outside of the city.

"9" has not been verified in-game. Please verify it!] or lower, she will reply:

If you are at level 10 or higher, however, she will reply: