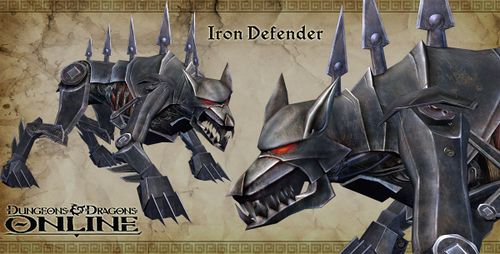 While resembling a dog in form, the iron defender could never be mistaken for a living creature. Composed of iron plates and bars, this construct creature has become increasingly easy to find among ruins and dungeons of Xen'drik. Wizards and sorcerers have long used them to protect hidden stores of treasures for years, but of late adventurers have reported finding these cheaply-produced constructs in areas where no intelligent life could be found, still patrolling and following the orders of some long-lost creator.

In combat, the iron defender relies almost exclusively on its bite, using a mouth filled with blades of serrated metal. In Xen'drik, the common variety of iron defenders has been upgraded; a small pouch just behind the iron defender's mouth can spew out a layer of slippery grease out before a foe. This grease possesses most of the properties of the well-known arcane spell, and it is quick to evaporate. While it lasts, however, all manner of creatures must tread carefully lest they fall to the ground, and become infinitely more vulnerable to the defender's bladed teeth.

As a construct creature, be warned that the iron defender cannot be reasoned with, charmed, fascinated, or manipulated in most ways. It must be defeated through more direct means.

Sightings of more advanced models of iron defenders - larger, stronger, and capable of using different forms of attack - have yet to be confirmed.

Artificers have modeled their homunculi companions on the Iron Defenders. These particular iron defenders, though similar to the mechanical counterparts, are different in the fact they have the ability to be customized and upgraded by their Artificer masters, utilizing weapon modules, enchanted armor docents, as well as other enhancements.