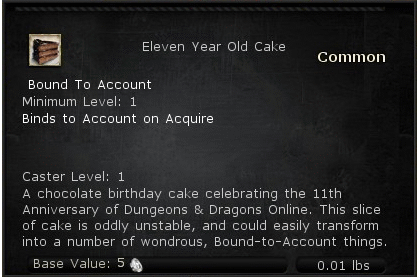 Eleven Year Old Cake is a free giveaway celebrating DDO's 11th anniversary on February 23, 2017. Unlike previous birthday cakes, this one is not distributed to each character, but rather is available as a redeemable coupon from the DDO Store, coupon code HAPPY11TH (twice per account).

The cake can be used until April 2, 2017; after that it will remain in inventory but not be tradeable.

Double-clicking the cake opens a trade interface, allowing you to polymorph the cake into one of the following items (all Bound to Account on Acquire