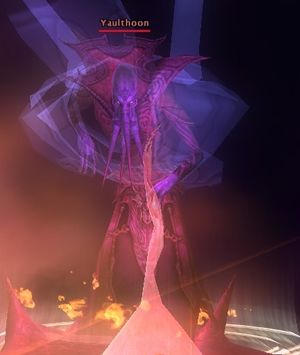 Welcome to my mind!

Habitat: In The Flesh — Final boss


Description: Yaulthoon is an Illithid. Like all Mind Flayers he has some DR that is bypassed with Byeshk damage. Mind flayers speak Undercommon but prefer to communicate telepathically as you'll see in his quest.

Yaulthoon always fights from a distance, often teleporting around his arena and attacking with his various psionic abilities.

Mind Thrust: This attack is a massive AOE that will hit pretty much everyone in the arena. It deals heavy psionic and energy drain damage. Will save negates, but requires multiple successive saves.

Intellect Fortress: In the realm of the mind this creature is fortified against all direct attacks. Once you destroy two Brain Pods, this buff will disappear for a few seconds.

Telepathy (Su): Mind flayers can communicate telepathically with any creature that has a language, within a great distance. (Mostly a flavour thing, but this explains why Yaulthoon and some other mind flayers are able to speak to you through your mind at a great distance.)

After killing all the Taken from the fashion show Yaulthoon will walk out on stage and do a short monologue. Everything will go black and you will transported to Yaulthoon’s mindscape.

First thing you will notice is purple sack-like structures--“pods”. These are the “souls” Yaulthoon has previously assimilated and the key to defeating him. Yaulthoon is on the edge of the mindscape with what appears to be a Tenser's Transformation Shield. He is invulnerable when his shield is up.

Yaulthoon orders his minions to attack (Taken, Flesh Renders, lesser Mind Flayers and Beholders; the types depend on difficulty) as he casts all kinds of nasty spells. Slay these quickly. Always fight the minions behind the solid pods, keeping them between you and Yaulthoon, who also casts energy spheres at you. Those spheres destroy the pods and weaken Yaulthoon. A nice benefit is that anyone standing near a bursting Pod will receive a boost to their hit points and spell points--important, for there are no shrines here and it is a continuous fight.

After about three Pods have popped, Yaulthoon will become vulnerable. Time to hammer the squid face. Just be careful not to fall off the edge when you run up to him. If you do fall off you will be teleported back to the middle of the mindscape. After a bit his shield will regenerate and more minions will reappear. Near the end you will start to see three fleshy pods in front of Yaulthoon; smash these to interrupt his attacks and ensure you can continue to beat him down. Avoid death at all costs. Yaulthoon is healed whenever a party member dies.