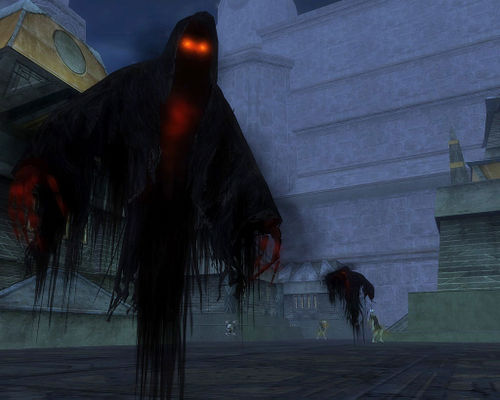 Only the bravest of heroes - or at least, the most prepared and well-equipped - will dare to hunt down wraiths. These hellspawned creatures are not the usual dimwitted undead foes like skeletons or zombies. Despite their undead state, they are more intelligent than the typical commoner - or typical adventurer, for that matter. They stand out as one of most intelligent undead creatures short of liches.

How to overcome such foes? Fighting characters should invest in ghost touch weapons when they can find or afford them, as these weapons are the only implements that can reliably strike at these ghostly creatures. Equally important, they must watch closely for any sign that a wraith is marshalling the dark will to begin a Constitution-draining attack. If they notice in time, the bets are to either get out of the way quickly, or raise a shield or weapon to block the attack. For arcane characters, magic missile is the most effective and most available solution. Meanwhile, a cleric hero should be prepared with plenty of restoration spells for the inevitable Constitution damage.