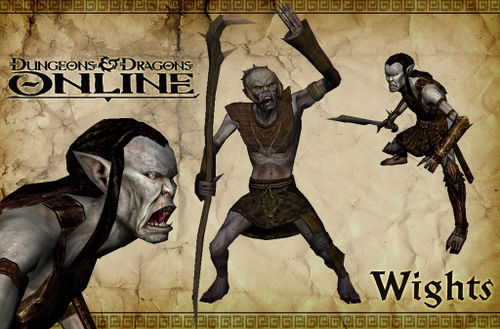 Your first experience with level draining is likely to arrive in the form of a wight. Sometimes mistaken by young adventurers for a ghoul or ghast, this similarly craven creature can be found in comparable places: catacombs, ruins, and other places associated with the dead. Like their lesser cousins the ghoul, the wight is not without some malevolent intelligence. They understand the speech of humans, though their undead minds remain immune to the mental spells of wizards, bards, and sorcerers.

Since wights have no innate resistances or damage reduction, direct damage spells are quite effective, as are standard melee and ranged attacks.

Wights can be both divine spellcasters and melees. The spellcasters are generally a much greater threat due to their heavy use of enchantment spells, so you will want to take them out first.