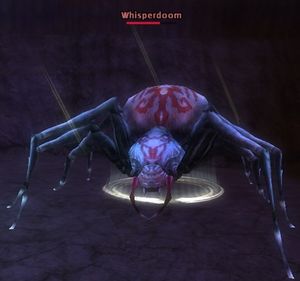 Description: Whisperdoom is a red named spider that can be very hard to kill.

When encountered in the Assault on Splinterskull chain she is in fact not meant to be killed, but avoided, and so more just an obstacle to your objective of destroying her eggs. She can be killed in that Level 4 quest, but it generally requires characters far over the level of the quest, and there is no reward for doing so. Compared to the Whisperdoom encountered in The Spawn of Whisperdoom, this version of her is much harder to kill as she is not vulnerable to light or other types of damage and she has far better regeneration. However, she is not a serious threat due to her not having any spells.

Notes for The Spawn of Whisperdoom version