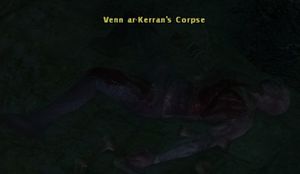 Description: Venn is the Guard Tember's cousins that was kidnapped by the Tunnelworm tribe. Unfortunatelly, you arrive too late.

Notes: Arlos and Venn are supposed to be kids, but since there is no child model in DDO, they use an adult human model.

Venn is being kept into a random cell around this large prison. Once you find his body, you receive the following message: