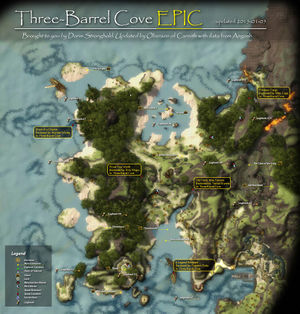 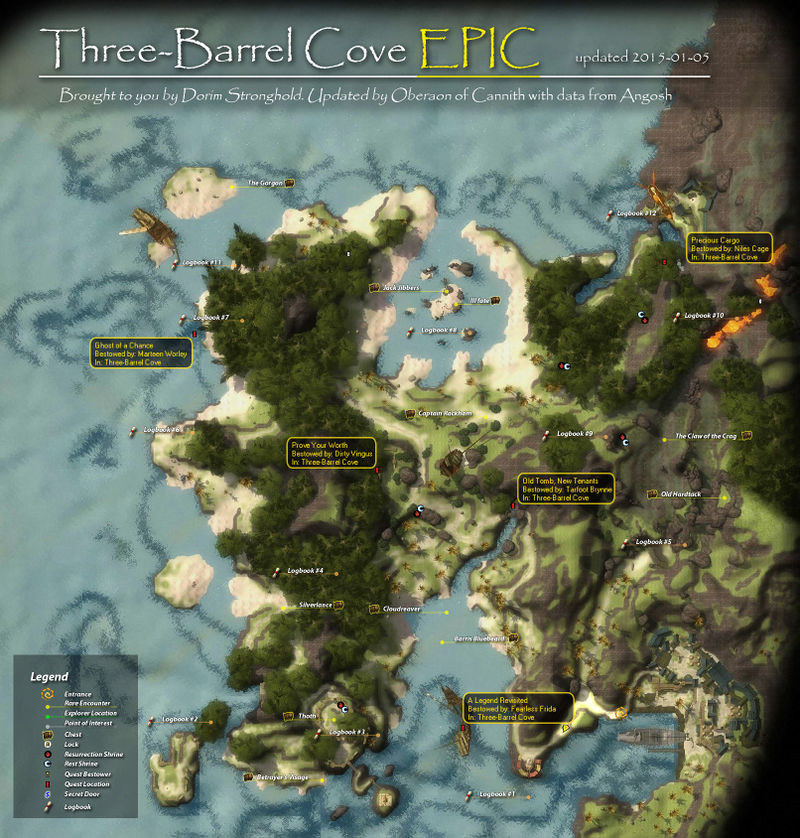 Epic version of the Three-Barrel Cove is a level 25 Wilderness Adventure Area, allowing characters level 20 through 29 for full XP rewards.

Optionally, complete the Pirates of the Thunder Sea mini pre-quest to guide you when getting to Three-Barrel Cove.

Cory Seagrass, a male NPC near the entrance offers the following fast travel within the zone, as you find each location and complete the quest. No Astral Shard usage required.

A Note on the Monsters[edit]

The monsters in this area, and the quests within it, are similar to those in Finding Dorris in that many of them are renamed versions of a single base monster. The game engine and Monster Manual accordingly treat the renamed versions as the base monster they were created from (meaning, for example, that a Broken Crown Sailor (Human) counts as a Pirate Sailor (Human) in the Monster Manual). Generally, any monster with "Pirate" as the first word in its name is one of these base monsters.

Due to a bug, monsters may occasionally spawn in the wilderness area without an adjustment to their name; selecting them causes the name to change.

4,200 XP each, 25,200 XP bonus for finding and defeating all. Note: Rares can all spawn in multiple places, all nearby their location on the map. If you see a working ballista, it means an airship has spawned nearby.

As is typical with airships, the Pirate Airships in this quest are impervious to direct attack. The most direct way to slay one is to use the ballistae dotted around each airship spawn area. However, this is painful to do on your own. The airship's cannons, grappling hooks, and the crewmates spawned from the hooks can all interrupt ballista shots by hitting you. If trying to farm rares from this area, consider bringing a hireling to present an alternative target.

Two airships (The Ill Fate and The Betrayer's Visage) can spawn in locations where it is possible to board them. The Ill Fate can be baited to sail under a climbable cliff and the Betrayer's Visage can be boarded with a good jump off the lighthouse. Once on board, if you head through the door to the engine room, storm the engine and slay the elemental, the ship will crash, killing the remaining crew and granting you the rare XP and chest. You will be spawned on the ground after leaving the stricken engine room, but do not linger once the elemental dies - you will be insta-killed if the airship crashes with you on board.