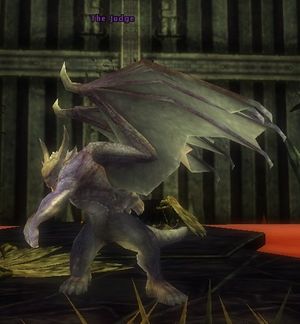 
Description: The Judge <Judge of Shavarath> is one of the raid bosses of the Tower of Despair raid, introduced in Module 9. You'll first encounter him along with his partner the Jailer in the Tower's first level..

On Normal/hard: Likely lower than on elite as it's unlikely he has maximize/empower on these settings.