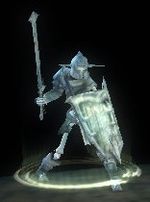 A Skeletal Knight at player level 17-30.

A Skeletal Knight is a pet that can be summoned by any character with the Skeletal Knight enhancement from the Pale Master enhancements . They can act independently, although similar to hirelings they can be somewhat controlled by the player character.

Unlike other class pets, a Skeletal Knight has no accessible Pet Character Sheet. It is also summoned differently: since it comes from an enhancement, the summon action is found in the Enhancements tab, not the Feats one. It is generally more convenient to drag this enhancement to a hotbar.

Your Skeletal Knight gains levels as you gain Wizard or Epic levels, not your total character levels. For example, a Level 12 (Warlock 10/Wizard 2) has a Skeletal Knight of Level 2, not Level 12.

Unlike other class pets, Skeletal Knights cannot be trained or equip items. Instead, much of their power comes from Pale Master enhancements and feats. Upgrades useful for the Skeleton Knight include:

If you select a usable item (right-click, or cycle w/ q), such as a door, lever, gear or rest/resurrection shrine, then hit the "gear" icon on the Iron Defender's command hotbar, your pet will attempt to "use" that item. This can be handy for opening doors or pulling levers, etc. This is particularly useful for items with high Strength requirements - with the correct enhancements, Skeletal Knights often have higher strength values than most players.

If you select a Soul Stone and do the same, the pet will "pick up" that soul stone (which then disappears from view). This includes your own stone, if you have died, and/or others'. There is no limit, any number of soulstones can be carried in this manner. The pet can then be directed to follow you (or your ghost), opening doors along the way to a shrine, other party member, or any available destination. If you run into a dangerous area - a trap or enemy creatures - you can order your pet to "Hold Ground", run through the hazard, then summon your pet to your current location. A pet cannot be ordered to "drop" a soulstone.

Skeletal Knights cannot be healed by conventional positive energy healing spells, as they are undead, but do not take damage from them. They instead take full healing from any negative energy spells targeting them. This makes them very useful against enemies who use lots of negative attacks, especially AoE (for example, +Cordovan from the Anniversary Party, who has a high-damage negative AoE spell which actually heals the knight faster than he is capable of damaging it.) Pale Masters wishing to heal their knight should instead invest in the Lesser Death Aura and Death Aura spells, which will also heal the Pale Master if they are in a Pale Shroud.