In game, the city can be divided into three distinct sub-areas: the Cliffside Docks district, and, far above sea level, the informally connected upper and lower Cliffside Tower District. Each has its own set of quests that can be accessed there, and different methods of arriving there from Stormreach. (Note that there is no direct access from Stormreach to the Part 2/Cogs area.) 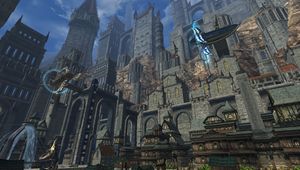 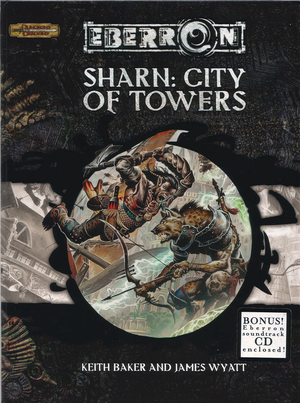 The upper district forms a ring around a central dome. It can be accessed via Captain Alban Dranmore, or from any Guild Airship, or, if you are in the Docks district, via the elevator at the north end of that area (see above). From the lower Tower area, you can get back to the upper area from the below the dome, via either a gust of air floor-rune or the winding staircase there, or via a levitating platform (ala House Cannith) located in the square area that can be seen on the map between the lower and upper Districts.

Note that at the northeast of the ring is a single locked gate which bars flow around the ring between north and east; racing around and around the dome is not possible.

There is no direct access to the lower area of the Tower district except from the upper, either via the spiral stairs beneath the central dome, or the levitation platform in the square area between the upper and lower districts.