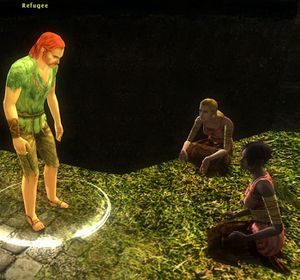 Description: Refugees are flooding into Stormreach Harbor from far and wide. Some are fleeing the Orc invasion of the Cerulean Hills while others come all the way from Khorvaire after their homes were destroyed during the "Last War." However, they all are looking to Stormreach as their last hope.

Refugees at the front of the line taking to a Harbor Guard (Refugee Toll completed):

Refugees at the front of the line taking to a Harbor Guard (Refugee Toll not completed):

Refugees near the entrance to the Cerulean Hills without unique dialogue say the following things:

Female refugee laying down near entrance to the Cerulean Hills: