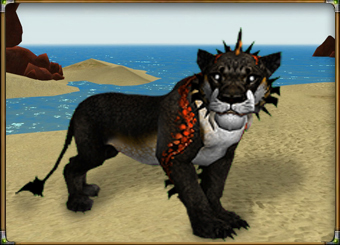 A new type of cat indeed stalks the wilderness, a wily hunter and incredibly capable fighter. Dubbed the razor cat by one of my scouts, this dexterous creature has an astonishing array of adaptations which contribute to the beast’s success. While they appear to be similar to big cats like tigers, they have abilities which surpass those of animals. Our preliminary reports indicate that they age slowly and have very long lives. I feel sure that they are magical beasts.

Roaming across wide areas, closely knit prides of these cats defend their territory against any other creatures they view as competing hunters or as a threat to their young. One of my scouts viewed an incredible battle between a razor cat pride and a cruel group of rogue hill giants. She said the scene played out much like a fight between a highly skilled ninja and a drunken minotaur. Using their innate abilities to perfection, the razor cats made fairly short work of the giants.

Razor cats have great strength and dexterity, and can claw and bite their enemies with incredible accuracy. They do, however, have an additional secret weapon that is even more lethal, and especially so to those ignorant of the threat. A razor cat’s coat bristles with a combination of sharp spines, bone-like blades, and fine quills. As a result, anyone who hits a razor cat in melee combat risks being injured by these spiky projections. For every successful melee hit, the attacker must rely on his reflexes to avoid being injured by the spikes. This was one reason the hill giants faired so poorly.

While on my scouting trip, I was able to observe a series of combats between razor cats. They often fight each other over mating rights, territorial disputes, and perhaps other matters which I could not discern. These amazing battles unfold in an almost ritualistic fashion, complete with bows of the head, feints, and savage claw attacks and body slams. I theorize that this recurring combat with one another is why they appear to be resistant to non-bludgeoning physical injury. Being constantly pierced and slashed by each other’s spikes and claws, they have evolved a way to deflect or absorb this form of damage.

When confronted with hostile razor cats remember these points. Be prepared to smash through the defenses of their hide by having bludgeoning weapons ready. When hit, razor cats seem to move into the attack in order to most effectively use their spikes. Unless you have exceedingly quick reflexes, you should only engage them in melee combat if you have spear block items or high physical damage resistance. If you attack from range, remember that your bolts and arrows will be a lot less effective than usual. Throwing hammers are the best option if you plan on launching a sustained ranged assault on a group of razor cats. Also, be advised that frost and ice attacks and spells should be avoided as these creatures easily shrug off the cold. Whatever your means of attack, remain alert. Unseen pride mates may stealthily outflank you and charge out of nowhere, ending your adventure a little earlier than you’d like.