Here you'll find a list of helpful advice and commands for the game.

See also PnP differences if you're familiar with the D&D system.

All commands are typed into the chat box, and are preceded with a slash character (/).

/afk *message* - The away from keyboard command allows you to notify others automatically that you are away from your keyboard. You can add a short message to give a reason or say how long you expect to be, or use the default (just /afk)

/alias - The alias command allows you to assign a phrase or command to a short name that can be easily triggered.

/death - The death command allows you to commit suicide at any time in game, except in PvP matches.

/invite - The invite command allows you to quickly invite another player to your group.

/gogglesup off and /gogglesup on - The gogglesup command allows goggles to be worn on the head instead of over the eyes.

/joinchannel *channel name* *password* - The joinchannel command allows you to join an existing channel. Type the command, a space, then the channel's name. If the channel has a password, type a space after the channel name and then the password. The channel will be assigned to your next available UserChat channel. The maximum number of channels you can be in at one time is four.

/listchannel - The listchannel command allows you to view a list of all channels of which you are a member.

/leavechannel *channel name* - The leavechannel command allows you to leave one of you current UserChat channels. Type the command, a space, then the name of the channel. Even if the channel has a password, you do not need to type it in order to leave the channel.

/loc - The location command allows you to retrieve detailed coordinates for your current position directly from the server. This information is especially helpful to the GMs whenever you need to make a Help Request, such as when your character is stuck or when you have a problem in a mission.

/quit - The quit command allows you to log out quickly, even if your toolbar is hidden because of a graphical glitch.

/r or /reply - The reply command allows you to quickly reply to another character's tell. When you type "/r" and follow it with a space, it is automatically replaced in your text entry box with "/tell *character name*" to make sure you reply to the person who spoke to you immediately before you started typing.

/squelch add *player name* - The squelch add command allows you to add a player to your squelch list. This prevents you from hearing that player in voice chat or seeing what they type in the chat box. Put a space before the player's name when using this command.

/squelch remove *player name* - The squelch remove command allows you to remove a player from your squelch list. Type the command, a space, then the player's name.

/t or /tell - The tell command allows you to send a message to another player that no one else will see.

/ui layout save 'name' allows you to save your current ui layout, like the positions of all the command bars, chatwindow, map, etc. 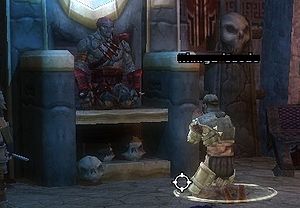 Example of the /sit and /grovel emotes

All emotes are typed into the chat box, and are preceded with a slash character (/).

/beckon - gestures someone to come closer

/bow - a formal bow of introduction, acceptance, or leaving

/cheer or /cheer2 – Your character claps, and does a little dance.

/clap - show of appreciation, not quite a cheer.

/cry - shows emotional distress. for when the rust monster destroys your sword and other times.

/dance or /dance2 - Your character starts to dance. Different races and genders have different dances. Dancing is continuous until another action is initiated. Other emotes are ignored until dancing is stopped. Iconic Heroes have the same dance animations as their base races. (DDO Forums)

/drink - Your character mimes drinking something.

/eat - Your character mimes eating something.

/gather - Your character gestures for the rest of the group to gather closely together, generally for a haste, bless, or similar AoE spell.

/grovel - takes "beg" to the next level.

/kneel - Appropriate for a cleric praying and other purposes.

/lfh - Your character searches the area for ham. A large red ham appears over his/her head, signaling other players that you are looking for ham.

/lfb - Your character searches the area for broccoli. A large green broccoli appears over his/her head, signaling other players that you are looking for broccoli.

/point - character points in whatever direction it is facing.

/shakehead - Same action as "no" but slower.

/sheathe - Your character puts away all weapons and shields. These items are still equipped, and will instantly be in hand again if you attack anything, but they will not encumber your character during trading with merchants or at the auction house. (Sheathing your weapons has no effect on the game other than role-playing benefit.)

/sit - Your character sits on the ground. Different races and genders have different sitting postures.

/sleep - Your character lays on the ground and sleeps. Different races and genders have different sleeping positions.

/stop - Your character gets a large stop sign over his/her head, notifying the rest of the party that they need to stop for some reason.

/wait - Your character taps his/her foot, waiting impatiently for something to happen.