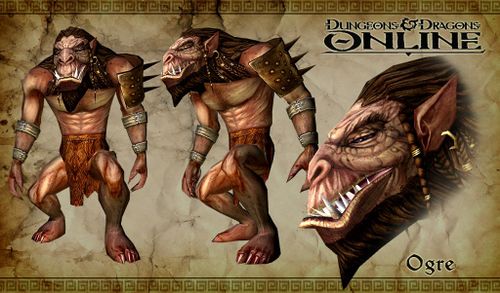 The ogre is a simple creature, but no less dangerous for it. Even more imposing, the ogres of Eberron are especially barbaric, and along with that barbaric heritage comes an ability to rage. When raging, an ogre represents an even more terrifying opponent, with greater Strength and Constitution to survive. The ogre is a strong, powerful brute of a creature, often found in large numbers. So, for an adventurer that's worth his salt, he should expect to encounter this creature that is stronger than he, and outnumbers him. What the adventurer has as his disposal to win - one hopes - is a bit more wit, a better mastery of tactics, and probably more than a few options.

The best strategy for overcoming the humanoid beast centers around avoidance. The ogre's power lies in sheer physical power when using its greatclub. Deny the ogre its advantage by staying out of range. Meanwhile, the ogre's lack of defenses make it vulnerable. It's vulnerable to spell attacks, with weak Reflex and Will saves. It's also vulnerable to fire, so striking from a long-ranged distance is the best approach. Failing that, the only option for some is to simply punish the ogre as quickly as possible. Its hide armor doesn't offer a lot of protection, and while it may have the strength of a giant, an ogre can't survive the beating that a giant would scoff at. Dwarves are one of few that have a good chance to stand toe-to-toe with ogres, thanks to their racial training in fighting giants such as these. 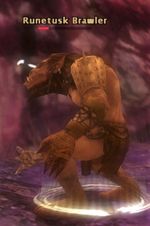 This is what the 4-second daze effect looks like

While the typical ogre may be somewhat primitive, if destructive, ogres can run the gamut from archers, chiefs, and even shaman.