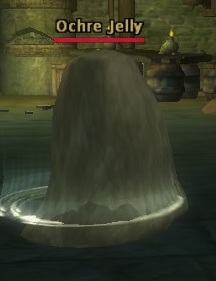 An ochre jelly resembles a giant amoeba, consisting of a thick, porous, golden sludge stiffly built up into the amoeba shape. It lurks in dungeons, slowly sludging its way along floors, walls and ceilings alike, under doors and through cracks, looking for victims. When it finds them, it extends, latches onto them, and then proceeds to engulf and constrict them. The ochre jelly reproduces asexually, and can sometimes be found with several of its divided offspring.