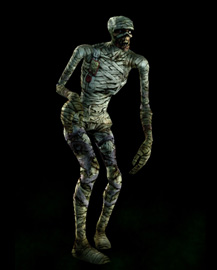 Mummies are preserved corpses animated through the auspices of dark desert gods best forgotten. Most mummies are 5 to 6 feet tall and weigh about 120 pounds. Mummies are found roaming about in the desert and necropolis quests and explorer areas.

*These more devastating spells are only cast by powerful high CR Mummy Lords.