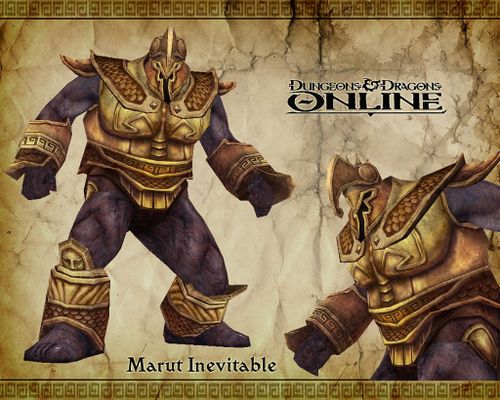 These creatures are alien, and while their goals and intents are almost never malicious, their very single-mindedness and intractability make conflict with humanoids as inevitable as their name. Whether a marut is tasked with retrieving an item or protecting it, watching a location or destroying all witnesses at it, heroes who delve into the most dangerous recesses of Xen'drik are sure to encounter one. And, being skilled heroes with some accomplishments to their name - adventurers are likely to engage the marut in trial of combat.

This creature wears plate armor and isn't especially fast. So when things go ill, as they will, you can accelerate in rearward direction with some hope of survival - assuming that the marut's chain lightning doesn't kill you while you try.

In order to deal with inevitable's offense, you should carry some protection to electrical damage. This will help against both the chain lightning and the electrical damage caused by the marut's fist. Sonic protection also helps. You need incredible defensive armors of your own, the ability to absorb strong blows like the marut does, or a large amount of healing ability.

To bring down the titan, chaotic-aligned weapons are useful. Without such damage reduction-breaching weapons, characters that rely on strength of arms are reduced to near total ineffectiveness thanks to the marut's strong ties to law and justice. Since the marut is a construct, rogues should rely on items - healing or damaging - as their sneak attacks are wholly ineffective. Since the marut's components repair very quickly, you must cause damage very quickly. A spellcaster can use damaging spells such as Disintegrate, and deal about as much damage as the rest of a party. The marut is an extraplanar creature, and the dismissal spell has a very small chance, if the spell can penetrate the marut's spell resistance and the marut fails to save against the effect, then a single spell will dispatch the foe. Blade Barrier will also work well but will make the marut chase the healer and will make it harder for melee types to assist.

The Marut's punches deal extra electric damage. And sometimes they will charge up a punch that will deal heavy electric damage to their target, and sonic damage to everyone nearby. This charged punch also will probably stun its main target if they fail a Fortitude save.