You again? Now I take my revenge! 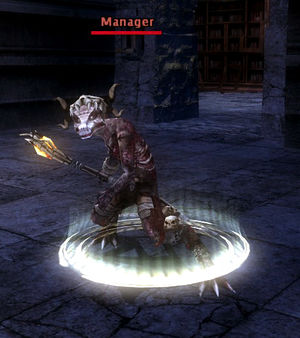 Bug: While he always spawn at Bargain of Blood after you defeat the General Manager, he does not appear on your Monster Manual there. To get him listed, you need him to spawn at The Tide Turns.

After you kill him in Bargain of Blood, somehow he gets a raise and his type changes to Undead in The Tide Turns. Still, he gets listed under "Humanoid/Kobold" in the Monster Manual.

He throws multiple Alchemist's Fire flasks at once. He also has what looks and sounds like a spring-loaded flask thrower custom-built in his staff.