Removed from the game in Update 13. 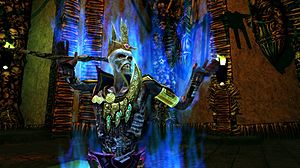 
Description: Malandis is a very powerful lich sometimes encountered in the Extraplanar Palace. Either he or Devashta will show up as soon as you hit the quota. With his various immunities, high saves and powerful disintegrate ward, Maladis is extremely difficult for many spellcasters to defeat.