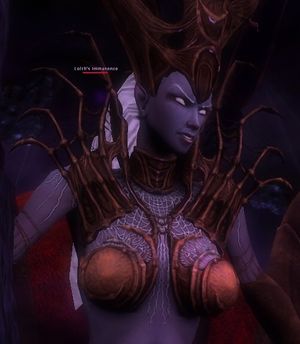 Habitat: Caught in the Web 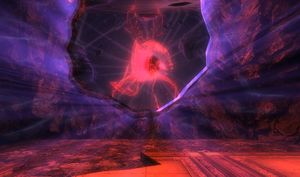 The first encounter with Lolth 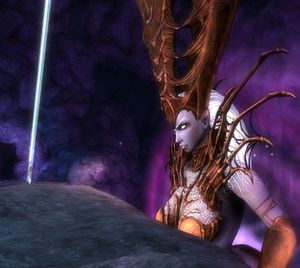 Note: Lolth's Immanence, as a raid boss, has different scripting for aggro than any regular monster.DDO Forums This prevents people from hiding and manipulating her attacks. While her eye beam and Spell Ward attacks are reserved for the person with real aggro, her other attacks like the evil trap or the soul summoning may occasionally target other party members including Ana. The chance of her attacking someone else is low though, thus not invalidating the use of a Lolth tank when you want the party to focus on some other other task like killing trash or draining artifacts.

Immediately following the first fight with Lolth's Immanence, Lolth will attack the party with her eight legs. Upon destruction, each of the legs will turn into a Bebilith Soul. You can see where the leg is about to pop up if you look at the ground. The party should focus on one leg at a time, because if the leg doesn't die and goes back into the ground it fully heals itself. The safest strategy is to go Leg then Bebilith until all the legs are down. Once all the legs are destroyed, Lolth's Immanence will return for a second fight.

Following the second fight with Lolth, her hand will appear. The hand is invulnerable (it can be damaged, but instantly regenerates if damaged much), but can be pulled away from the party with a successful intimidate check ( ●♦44Epic Normal). If you lack intimidate, you can damage it via any untyped/force spell damage such as Blade Barrier. If you lack both spell casting and intimidate, you can use certain destiny abilities such as Orchid Blossom from Grandmaster of Flowers or Wild Shots from Shiradi Champion.

As of Update 15, the hand sticks around for a much shorter period of time. It no longer needs to be kited until the end of the raid.