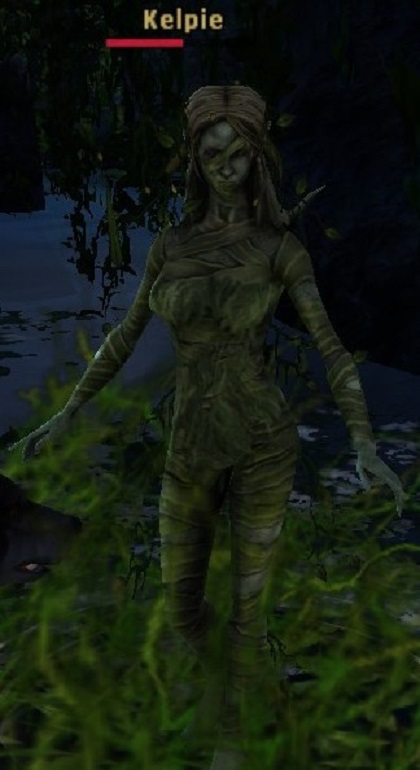 Origins: The Kelpie comes from Scottish origins, as a being of faerie. They are a shape-shifting race that entice their human prey by either appearing as a beautiful woman, or a strong horse near or in a bit of running water. It is also said that if they physically touch a human, the human in question is charmed, and the kelpie brings it down into the water, drowning the human in the process. The human becomes the kelpie’s next meal.

Description: The Kelpie either looks like a large, strong horse with a dripping wet mane, or a very beautiful woman, with seaweed or water plants in her hair. Their color is usually green They are a carnivorous and long lived organisms. They usually are found as solitary individuals, but extremely rare cases have been known to be in pairs or living groups.

Kelpies first appeared in the White Plume Mountain quest of Update 39. They have a high DC, and protect the left hand corridor in that quest. One also appears as a side boss in The Offshore Account and they appear in several places in The Feywild.