The trunk contains the following:

Mysterious Remnant Boost Potions
By drinking this elixir, whenever you gain Mysterious Remnants, the amount is increased by +30%, plus another 1 guaranteed Mysterious Remnant. Stacks with other Remnant boosts. Each Elixir lasts 6 hours, pauses in public spaces, and persists through death. You'll receive a stack of 5 single-use boost potions from the trunk.
Timer does not pause in wilderness adventure areas.
100 Astral Shards
Bigby's Guiding Hand 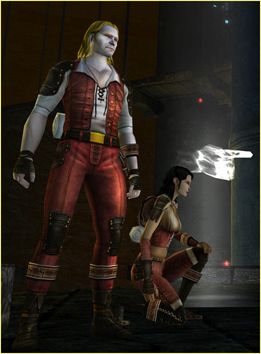 Traveler's Outfit and Bigby's Guiding Hand
Introducing an all new tool for exploring dungeons with friends: Bigby's Guiding Hand! Summons a magical pointing finger to indicate direction and places a marker on the dungeon map. More than one hand may be summoned at the same time and placed anywhere in the dungeon, landscape, or raid.
The hands can be used for a variety of purposes. With Bigby's Guiding Hands you could do any of the following:
A hand is single-use. Each hand lasts for 1 hour and places an X on your map after summoning, and cannot be moved or dismissed. :The hand is illuminated by a tall magical light shaft which is visible from far away. The Traveler is a mischevious member of the Eberron Pantheon, so you'll receive a stack of 50 Bigby's Guiding Hands from the Traveler's Trunk in one random color: Blue, Green, Orange, Purple, Red, Yellow, or White. The X on the map when summoned is in a corresponding color to the summoned hand. There is no restriction on having the same color summoned in the dungeon by different people, and one person could even use multiple colors. You could use multiple colors to indicate which areas to explore in what order, or which sequences of levers to pull! Each of the 50 hands is unbound, so you can even trade some with your friends and party members.
Traveler's Outfit
You'll receive a rare cosmetic outfit from the trunk: Traveler's Outfit. This outfit is suitable for any questing, hijinks, or adventures! This cosmetic outfit is unbound.
2500 Omnispell Dusts
1000 Omnispell Stones
5 Sovereign I Experience Boost potions
Grant a 50% bonus to XP for 3 hours per potion.
5 Major Slayer Boost potions
Grants a 200% bonus to slayer quest kill count for 1 hour per potion. 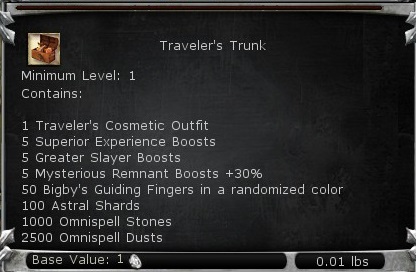