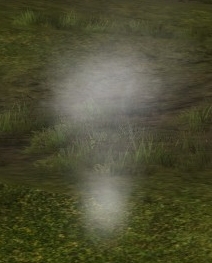 An Invisible Stalker as seen under the effects of True Seeing

Invisible stalkers are creatures native to the Elemental Plane of Air. They are Elemental type monsters. They sometimes serve wizards and sorcerers, who summon them to perform specific tasks.

A summoned invisible stalker undertakes whatever task the summoner commands, even if the task sends it hundreds or thousands of miles away. The creature follows a command until the task is completed and obeys only the summoner. However, it resents protracted missions or complex tasks and seeks to pervert its instructions accordingly.

Invisible stalkers have an amorphous form. A see invisibility spell shows only a dim outline of a cloud, while a true seeing spell reveals a roiling cloud of vapor.

An invisible stalker attacks by using the air itself as a weapon. It creates a sudden, intense blast of wind that pounds a single target on the same plane as the creature.

An invisible stalker can be killed only when it is on the Elemental Plane of Air. When performing a task elsewhere, it automatically returns to its home plane when it takes damage sufficient to destroy it.