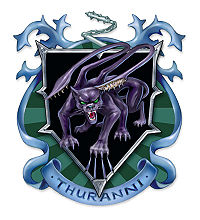 House Thuranni is an elven dragonmarked house. Its members carry the Mark of Shadow, which is also carried by House Phiarlan. This is the only dragonmark carried by two separate houses.

This house was created when several members of House Phiarlan split off to form their own house during the Last War, about 25 years ago. Today there is fierce rivalry between the two houses for dominance in their fields (both the artistic and the undercover ones).

This house is also one of the most secretive houses in the history of Eberron. Its members will not even admit to being in the house as just like in a gang once you are in it you are in it for life, and as well they have covertly infiltrated every other notable House. There is but one listed member to House Thuranni at any given time and that person is a revolving person as each member has taken their respective turns playing the role of figure head for the house.

The heraldic symbol of the house is a displacer beast.