The High Road leads west from Eveningstar, towards the Storm Horn mountains and the frontier of Cormyr itself. 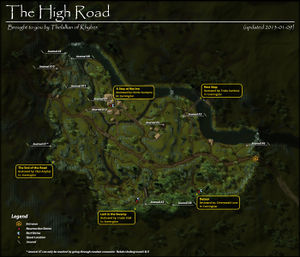 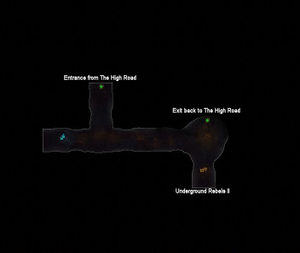 The High Road is a wilderness adventure area accessible from the west end of Eveningstar, by the gate leading to The King's Forest. It has a heroic and an epic variant:

Unlike most explorer zones, the High Road has bear traps scattered around the zone. They are randomly located and can be disabled as any normal trap. Just like the monsters around, the traps also can respawn in places you already visited.

In addition to the Rare Encounter / Slayer / Explorer typical to all Wilderness Adventure Areas, the following quests can be found in this zone, and together make up The Netherese Legacy story arc. :

* Note: All of the first four quests must be completed and turned in to flag for the final quest, The End of the Road.

Note that the random encounters can spawn at any encounter spot, can respawn after completion, and can sometimes even spawn twice at the same time. Repeated encounters in the same instance will reward full XP. There is no XP penalty for repeat rare encounter completions.

Oriphaun's Journals on the High Road[edit]