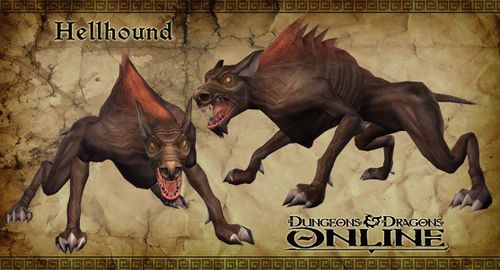 Many a brave adventurer, exploring the depths of the underground dungeons of Xen'drik, has seen a canine form in the half-light of a flickering torch. Another dog, or perhaps a wolf, he ponders. With confidence, the adventurer ventures forth to find a fiery grave like so many before him.

The typical specimen of canis infernis stands over 4 feet tall at the shoulder and weighs more than the typical elf male. As a creature summoned forth from a lower plane - typically Fernia, the Sea of Fire - the hell hound has immunity to a host of spells and effects that would otherwise affect animals or other creatures of the world of Eberron. More important to the fighter, though, are the hell hound's sharp teeth and fiery breath. This fiery breath strikes at the hell hound's victim with every bite attack, fully doubling the damage suffered. More threatening, the hell hound can breath out a cone of fire not unlike that of a small drake or dragon. Hence protection from fire is of paramount importance when dealing with these four-legged combatants. Without their fire attacks, the challenge posed by a hell hound is reduced to little more than that of a trained attack dog.

As one might expect, spellcasters should bear in mind that the hell hound, raised in burning pits of flame, is not subject to fire attacks of any kind, magical or nonmagical. On the other hand, cold-based offensive energies, from the lowly chill touch to the more puissant cone of cold, prove effective.