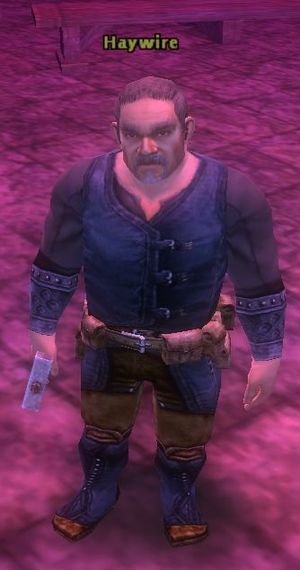 Description: Haywire is the gadgeteer of the Laughing Knives, and an expert artificer, capable to even reanimate a marut. His true name is Phineas Hayward

Haywire is stuck in his own foundry, locked by his own creations. He contacts and asks for your help via a multitude of Speaking Stones around the place. The first one you find is right after you are forced to destroy Assistant RC2:

At the entrance to the Assembly, at the east wing, he will be able to pass more instructions:

At the entrance to the Storage, at the west wing, he will be able to pass more instructions:

If you open the passage between Assembly and Storage (where the shrine is), there is also a speaking stone there:

At the north wing, you can talk to him again when you approach the gate to the Master Control room:

After you defeat the Master Control Unit, he can contact you again near the self-destruct lever:

While you are escaping the foundry, he will tell you while you run:

After the foundry blow up, you are finally able to meet him in person:

Haywire is found guarding the east entrance to the Maintenance room. If you talk to him, he will say:

After you already acquired an item from one of the members of the Laughing Knives, he will say:

Haywire is stuck (again) in the secure room of his new foundry. 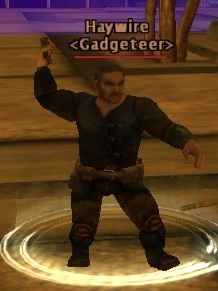 
Description: Illusions of Dirge of Karrnath, Haywire, Marek Malcanus, Shen Kulle, and Veil only spawn on Epic Hard and Epic Elite difficulties. They appear at the end fight once Orphne's Shadow has attacked. They do not have to be killed for the quest to complete.