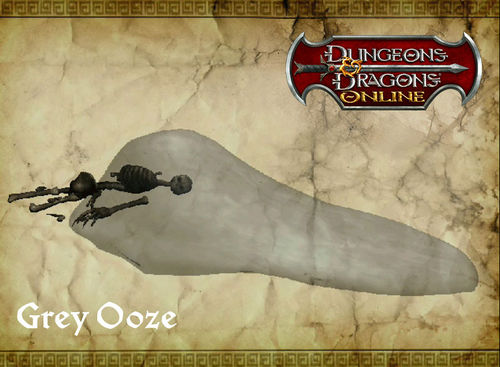 You can count yourself lucky if you've done any exploring of the dungeons of Stormreach and still failed to encounter any of these pestilences. Oozes are common within the wet and dark confines of the underworld, and the gray ooze represents one of the weaker ooze varieties found in Xen'drik. The worst part of encountering these nuisances is that one may not even notice anything unusual about these little puddles until it is too late. Without a truly superior awareness - generally found only in the most perspicacious of rogues - the creature is likely to have the advantage of surprise. And so the encounter begins with the ooze, slow-moving though it may be, with the first strike advantage.

The important thing to remember when fighting this sort of creature is preparedness. Like most threats, there are better and worse ways to deal with the menace posed by oozes. The worst way involves cutting a gray ooze up with a prized and cherished magical slashing or piercing weapon. Why? Two reasons. One, any slashing or piercing weapon may cause this ooze, like many, to split into two pieces. Sure, the two component oozes may be smaller, but they will now be attacking twice as often. Plus - and this is key - these oozes secrete an acid that not only causes more damage to you, but also has the potential to cause significant damage to your weapon, arms, or equipment. There's only so much maltreatment any such item can take before needing costly repairs.

What then to do? The best course of action is to either avoid the creatures altogether and go on with the mission, or to rely on the explosive elemental attacks of a wizard, sorcerer, or cleric. Failing that, bring along a simple wooden club. Or five. The crude bludgeoning weapon won't cause the ooze to split, and if the weapon is lost to acid, well, that's probably cheaper than the repair of an enchanted blade. Indeed, if you had the chance, even switching into less valuable armor, or equipping an unenchanted shield would be for the best...