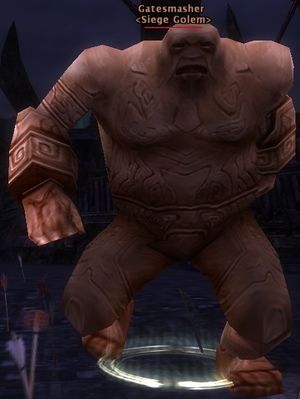 A clay golem is immune to any spell or spell-like ability that allows spell resistance. In addition, certain spells and effects function differently against the creature, as noted below.

A disintegrate spell deals full damage, and clay golems have lower then average fortitude saves for a construct.

Unlike in PnP, most damage spells in DDO do not allow spell resistance. To combat this, Clay Golems instead have massive elemental absorption. 50% Absorption for all Energy types except those specificaly noted above as otherwise. This includes but not limited to: Electric, Fire, Sonic, Light, Alignment damage and even force damage. This is new as of Update 9. Previously they were simply immune to all these damage types. Untyped spells that do not allow an SR check bypasses this immunity.