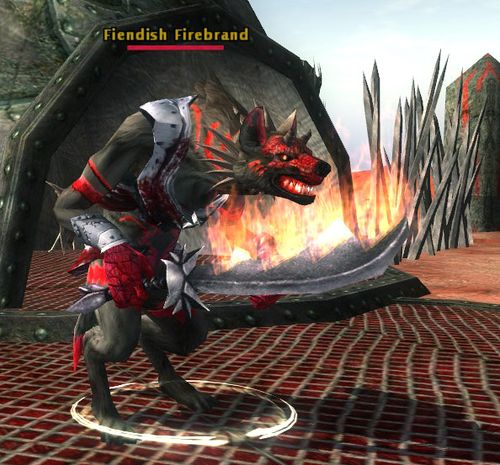 Fiendish Gnolls are Gnoll type monsters (they would be Humanoid type monsters with the Fiendish inherited template in pen-and-paper D&D[PnP]) belonging to the Gnoll race. Usually they are Chaotic Evil.

Fiendish Gnolls are a demonic lot (literally), centered around the theme of fire, slavery and evil. They have melee and ranged combatants, arcane and divine spellcasters (their few divine spells may actually be item-based). All of them have more than one attack mode, usually at least both melee and ranged.

They have gnollish fur over most of the body, demonic scales visible over head and hands, horns, and evil-looking spines defending the neck. The tell-tale black-and-red color pattern readily identifies them as fiendish creatures, like Fiendish Bats, Fiendish Scorpions, Fiendish Spiders, Fiendish Troglodytes, Fiendish Trolls.

Fiendish Gnolls usually wear metal armor, painted black in some points, freshly blood-stained in others. They are all armed with a scimitar and a longbow. None of them are equipped with mundane weaponry, all wield Flaming, Acid Burst or Pure Evil weapons.

They are often associated with Firebrand Gnolls. They lead them in the name of some superior evil power, like Rashad the Vizier or Queen Lailat.

Combat style and weaponry depend on the individual Fiendish Gnoll's class. Usually, more than one applies. Some are capable of tactical feats.