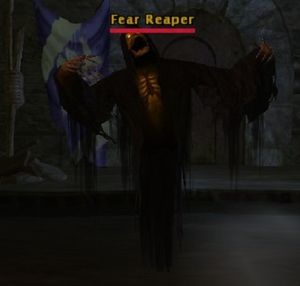 
Organization: Each time an enemy spawns or dies, there's a chance a reaper will spawn as well.


Description: Fear Reaper has stacking DoT effect ("Fear of Death"), which damages all characters in the dungeon until the reaper is destroyed (infinite range). There is only a small radius around him where "Fear of Death" doesn't apply.

Players have observed that the DoT occasionally stops ticking when the reaper runs out of nearby targets (DDO Forums).

The Fear Reaper doesn't like to come close to the players. Usually stays in initial position, but would like to have line of sight. Hits hard in melee, but in line with champions.